Jealous Of Your Training Partner’s BJJ Progress? Just Keep This In Mind 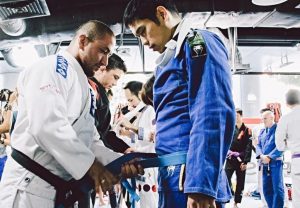 Let’s say that you began training Brazilian Jiu Jitsu with a friend, or with someone else who started at around the same time as you did. The two of you were pretty close to each other in terms of technique and overall skill… Up until recently, as your training partner started improving WAY faster than you.
In short: that makes you feel kind of jealous of his progress. It’s as if he is somehow better than you are, but really isn’t, since you were off to the same start… And besides, shouldn’t you be happy for their success?

Well, there isn’t anything wrong about being jealous of your teammate’s progress. But there’re a couple of things that you should keep in mind.

T’S ALRIGHT TO BE JEALOUS, DON’T STRESS ABOUT IT

First of all, don’t be too hard on yourself for being jealous of your friend’s faster improvement. Jealousy is a natural thing; and, besides, you’ll always be comparing yourself to someone else in BJJ. That’s just the way things are, and this comparison can ultimately turn you into a better Jiujiteiro – if you use it constructively.

That is to say, comparing yourself to others and being jealous of their achievements is normal. Just don’t let this jealousy and comparison turn into hate and negativity.
If you let this emotion run wild, there’s a good chance that you’ll end up hating Jiu Jitsu altogether; when its only true goal was to push you towards improvement as well.

EVERYONE HAS DIFFERENT TALENT LEVELS

With the question of jealousy itself out of the way, let’s take a look at the first thing you should keep in mind: talent.

Everyone has different levels of talent, and this talent doesn’t have to be visible immediately from the get-go. Instead, it can be sort of „triggered“ further down the journey, when the athlete has acquired the basics.
There’s not much you can do about this. Either you’re more talented than your training partner(s), or you’re not. Therefore, it doesn’t make any sense for talent to frustrate you – some will progress faster than you, simply because of this inborn potential.

Just use what you have and give your maximum on the mats!

EVERYONE HAS DIFFERENT OBLIGATIONS

Now, your training partner may be improving better simply because he has different obligations than you do. He may have more free time on his hands; or BJJ may be more of a priority for him than it is for you. They may still be at school, or BJJ may be their main hobby – while you’re working, and enjoying other hobbies as well.

That is, their progress may be due to the fact that they are able to spend more time on the mats than you are, that they’re watching more instructional videos, that they’re investing more of their spare moments into gym and prehab work, that they’re taking notes every single time after training… The possibilities that could be making their progress faster are numerous!

And, as in the previous piece of advice, there’s not much that you can do about this. Just utilize your available time and energy, that you’re ready to invest, into improving your Jiu Jitsu.

YOUR TIME TO SHINE…

… May very well be just around the corner! Some people simply pick things up faster than others, but that shouldn’t demotivate you. On the contrary; it should motivate you to push yourself, because you never know when your breakthrough – as it was for them – will happen.
The only thing you can do is to keep training, keep drilling, and keep rollling the best that you can.