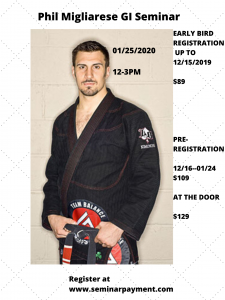 We are having the head of our Association , Balance Studios , Phil Migliarese up for a GI seminar. We will also be having Dennis Sugrue, Len Sonia, and Steve Overend being awarded their 3rd degree on their Black Belts.

Here is some Background on Phil.

Phil Migliarese’s introduction to martial arts began with karate classes at the age of 8. By the time he was 12 he had discovered Brazilian jiu jitsu, a virtually unknown style of grappling at the time, but one that would soon transform the martial arts forever.

This was before the Ultimate Fighting Championship showcased the effectiveness of jiu jitsu to the world. It was also before the Gracie family, many generations of whom had revolutionized the Japanese form of jiu jitsu since the beginning of the 20th century, went on to become the legendary pantheon of fighters they are today. Those are the people Phil trained with. He went directly to the source.

Migliarese Family and The Gracie Family

Throughout his years with the Gracies, Phil has become more like a member of the family than a student. Relson Gracie refers to him as a brother. And rightfully so, considering Phil shared the mat with them before Gracie jiu jitsu became a staple in every self-respecting martial arts studio in the world. He even participated in the legendary challenge matches that were frequent occurrences back when the family first issued the $100,000 challenge.

These fights were labeled so because $100,000 was exactly the amount of money they would pay to anyone who could beat the Gracie fighters on the mat. In those days, it was a common occurrence for men who had studied martial arts their entire lives to barge into the Academy and denounce the effectiveness of Gracie jiu jitsu against their own style.  When Royce gained popularity with the UFC, he was the guy everybody wanted to fight. In order to get to him, they would first have to go through Phil, or other students like him, to prove that they were up for the challenge. Phil’s first challenge match happened in Philadelphia, when he was just 14 years old. Royce Gracie was in attendance that day, when an adult male karate instructor walked in to the studio with entirely too much confidence in the black belt he wore about his waist.  Phil was merely a white belt in jiu jitsu at the time, but had been studying for several months and had already developed a good foundation in the basics. He immediately closed the distance to render his opponents’ strikes ineffective, took him to the ground, and attained the mounted position. Once there, he forced the much larger man to tap in 30 seconds. When Royce informed the man that he had just been beaten by a 14 year old, the man’s bravado deflated, along with any chance of a rematch.  Scenes like this played out on a regular basis, and no one ever collected that $100,000. Instead, the challengers received something much more valuable than money – a reality check. If they were wise, they supplemented their training with jiu jitsu.

When Phil was 17, he left for Hawaii to live and train with Relson. For 3 months, he lived and breathed jiu jitsu; even carefully following the Gracie diet constructed by Carlos Gracie to ensure that his family of fighters would always be in top physical form. Phil still abides by the diet today.  At the end of those 3 months, Phil flew back to Philadelphia, where he concentrated on his studies whenever he wasn’t teaching jiu jitsu. After the semester, he flew back to Hawaii to train for 3 more months before coming home and repeating the cycle all over again. By the time he was 18, he had enough frequent flier miles to add another stop on his journey, and it was then that Phil began training at the Gracie Academy in Torrance, CA.  His duties, aside from teaching basic jiu jitsu to beginners, included scrubbing the toilets, sweeping the mats, and generally working as best he could to ensure the place met the meticulous standards of Rorion Gracie. His thoroughness would be tested even further when Grand Master Helio Gracie, Rorion’s father, arrived at the Academy.

According to Phil, there was a period of about 3 months where he taught every class at the Gracie Academy; even those ordinarily taught by Royce. Phil was so enmeshed in the family and the studio that he was invited to assist Royce with his jiu jitsu seminars all over the country.